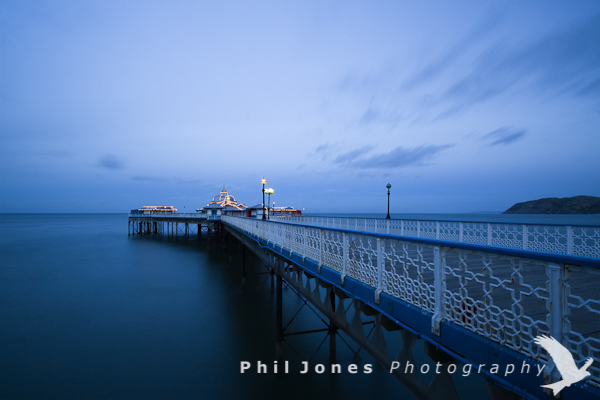 A very, very cold day in January (2008). I was in Llandudno for a conference for a couple of days and took the opportunity to head down to the pier hoping for the right light to get a calming view of this North Walian attraction. With my digits freezing (both those on my hands and those in my camera) I walked the pier before settling on this viewpoint with the pier extending towards the horizon, the last glimpse of twilight giving some interest to the sky and the sea smoothed flat with a long exposure (10 seconds at f22). With the shot in the bag (memory stick) I headed off back to the hotel and a well earned whiskey. The evening was topped off by chatting to Boy George outside the hotel (he was playing in the town that evening) - a charming and approachable man with a hat that I would have killed for when I had been freezing on the pier. A print of this photograph was donated to the Ceredigion Jigso group where it was auctioned off later that year.