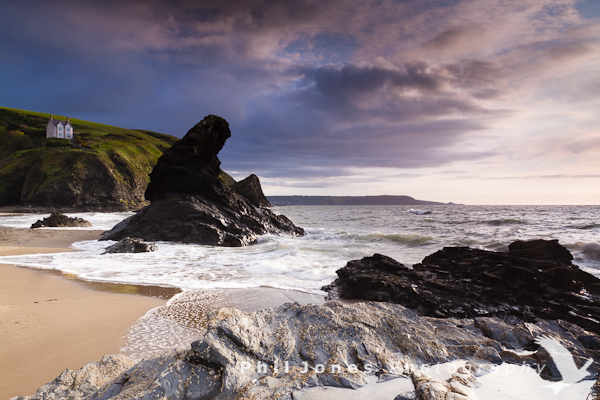 28th April 2009. The promise of a lovely sunset and I headed off towards the Urdd at Llangrannog with the intention of a sunset view of Ynys Lochtyn. I was early so took a detour to Llangrannog to see how this spectacular rock looked. The tide was coming in and I had to move quickly to get to the far side of the rock (looking south now) and set up the tripod and camera with a neutral gradient filter in place. The sun was starting to set to my right and the clouds were lighting up beautifully. Time for one shot (1/13th second at f16, if you need to know) before the rising water threatened to engulf me. A quick repack of the trusty camera bag and then back through the incoming waves to the car. Just goes to show that no matter how much you plan a shoot in advance it is often the spur of the moment scenes that prove more rewarding. I did get to Ynys Lochtyn and watched the sunset over the spit of land (Image reference 2098) so I managed to get my planned shot and an opportunistic image too. The long drive home was full of anticipation for seeing the photographs on screen and tweaking them to get the scene as I remembered it. Long day. great fun!