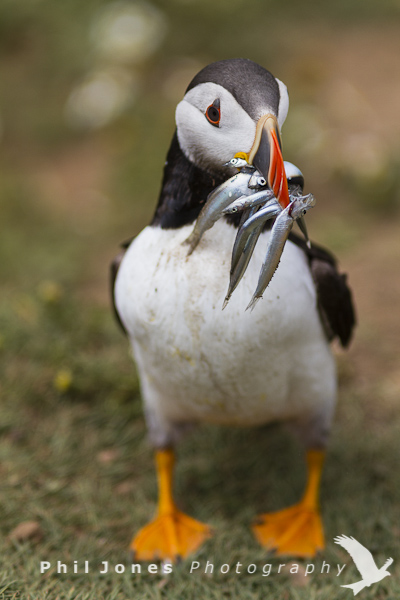 What a wonderful weekend! Myself and Sarah spent the weekend in Pembrokshire. We had long planned to go and see the puffins on Skomer but thought we couldn't do it this year because time seemed to be escaping us for one reason or another. We did actually plan to go sooner and even booked a Monday off to have extra time to get onto the island (Top Tip: Don't plan on a boat trip to Skomer on a Monday; the boats don't run on a Monday). So we booked a room at a lovely guest house in Dale and headed off on Friday evening. We were up early on the Saturday and headed for St Martin's Haven where we arrived at 0830 and bought tickets for the boat which sailed at 1000. Spent the time watching (and photographing) an Atlantic Grey Seal which was perched on a seaweed clad rock just a few yards off the beach. Great fun! On the island our expectations were exceeded. We walked to the Wick where there were dozens of puffins in and around thier burrows just a few feet from the path. They seemed to have no regard for us at all and portraits of the puffins were easy to get. More tricky were shots of the birds coming in to land (managed a few decent ones) and trickiest of all were the sand eels in the mouth shots because a mouthful of sand eels are a seagull magnet and the puffins that make it through the seagulls that lurk like sharks in the shallows head straight down thier burrows at a rate of knots. I was despairing when a little fellow landed on the wrong side of the path, mouth stuffed with silvery, sand eels. He hesitated and in that moment my chance was seized and I got this shot. All in all a wonderful day out and (if you read this section regularly you will know that I always spoil Sarah after a photo shoot) topped off by pie and chips at the local pub.