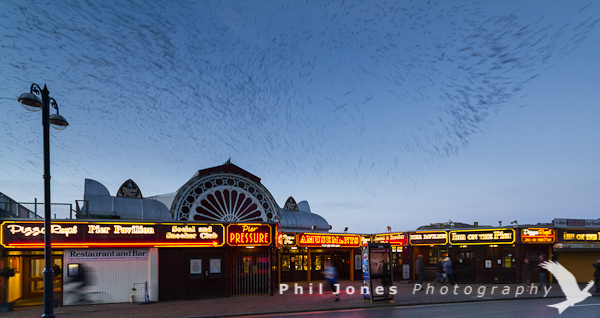 They're back! Once again the evening spectacle of a horde of starlings swooping over the seafront has returned. A magnificent sight that has to be seen and heard to be believed. The birds may roost quite quickly after arriving or spend longer flocking over the pier and making those shapes that sometimes suggest a deliberate display. Recently the starlings have been beaten to their perch by a buzzard which tends to make the aerial displays a little longer. Most often I watch (and photograph) from the jetty which offers a profile of the pier, the birds and the monument. I was fortunate enough to have a photograph of the starlings backlit as they flew to roost in the 2010 British Wildlife Photographer of the Year book. This time I was after something a little different. I wanted the gaudy, seaside lights of the pier plus the blur of the birds as they flocked - including one of the seafront's striking streetlights. The position was fairly easy (risky given the aerial bombardment, but easy) all I needed was a display and the birds did not disappoint. 10mm, f6.3, 1/8 sec, neutral grad to hold back the sky a wee bit and plenty of shots to get the right one. Sarah braved the guano from the cover of a doorstep but miraculously we both escaped with clean coats!