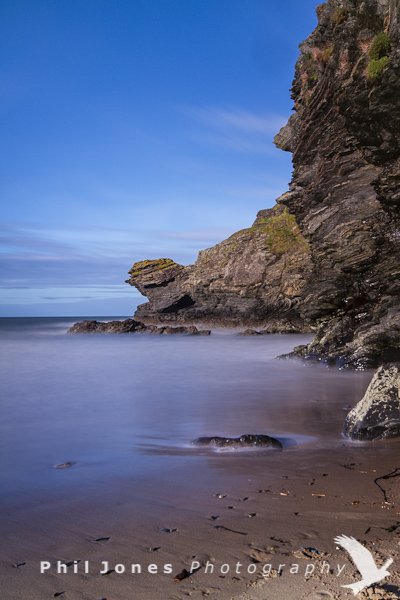 Saturday 8th December spent the day at the Ffabric Craft Fair at the Urdd in Llangrannog. Great place with loads of great things to buy for Christmas (declaration of interest in that I have some work there too). Took the opportunity to head down to the beach at Llangrannog to get a photograph whilst the sun was shining. Made friends with a black labrador who followed me around the beach - was looking more for a ball to fetch than showing any interest in the 10 stop filter but I tried to educate him. Took a few views (different one on facebook, if you are interested). The tide was coming in (which reminds me I need to change the tide settings on my watch!) so I didn't have as long as I wanted to get several viewpoints. I like this one with the strata in the foreground rock clear and Carreg Bica jutting out from the end. Managed to keep my canine assistant out of the way too.

Also, we (Sarah and I) stated that we would give 25% of our Advent Craft Stall sales to a charity. We are sending a cheque for £60.00 to Beacon of Hope.