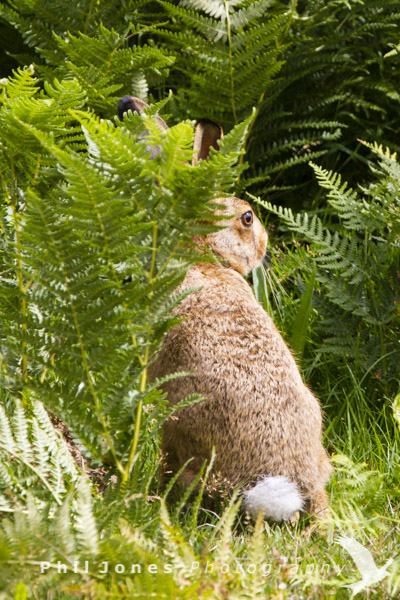 This has been a bit of an odd weekend all told. Started badly with Sarah being unwell and housebound until today (Sunday). I was out on Friday (having made sure Sarah had plenty of gin within easy reach, of course) watching the beavers (some really great views too). Saturday I was out at Ynyshir and then went to Kites at Nant yr Arian (plenty of water and paracetamol for Sarah and gin a little further away...). Today Sarah was well enough to venture out and we walked around Ynyshir. Whilst we saw relatively little in the way of birds we had some great views of dragonflies warming up and then some lizards doing the same thing. The lizards were small and I guess, hadn't learned to disappear at the first sight of trouble so they posed well (we glimpsed one with a half-tail who presumably had learned his lesson as he was off very, very quickly). I joked that we now needed to see some mammals to complete the views. As we rounded a turn we saw a young hare in the middle of the track nibbling away. (S)he was unconcerned about us and stayed whilst we watched; then for some reason it was spooked and ran - directly toward us before veering off to the side and being surprised by the horses grazing there. It stopped to rethink it's strategy before racing past us and away. Never had such good hare views (and for those who know me I haven't seen much hair for quite a while, I know!). We would have settled for that but as we neared the reception we were called over by a man and his two children who were watching a mole snuffling through the undergrowth. Again we watched for a while and had some great views of the little fellow. So beaver, dragonflies, red kites, lizards, hare and moles - a pretty good wildlife weekend and all pretty much on the doorstep. More gin to celebrate methinks...

I have one photograph of the brown hare here and there are photographs of the other beast (and a few words) on my Facebook page if you want to check them out.